Back to all posts

ALWAYS NEVER BEAUTIFUL FOREVER, the brand new album by The Trudy is now in its 10th week on the Genepool Top 10. It spent two weeks at Number 1 and is currently at 5. 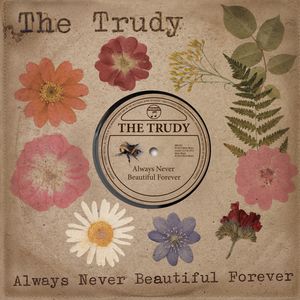 Here are some reviews:

Got to say that after a long wait for the album, it's excellent. There's not a single "filler" or disappointing track. This could well be The Trudy's very own masterpiece. Listen once and you can't help putting it on repeat. (Independent & Unsigned Show, 6 Towns Radio)

SOUNDS LIKE? Well, this is a band who are so in love with pure pop-rock that they do it extraordinarily well. If the world were a more fair and rational place Mark Chapman would have gone after Donald Trump and The Trudy would always be mentioned when we listed the biggest and the best of the pop-rockers, it'd be Fleetwood Mac, Voice Of The Beehive, Scissor Sisters, The Trudy, Alice Cooper and The Bangles. You put "Rocket Heart" on as loud as you can get it and you'll get the idea. So, I guess that answers the 'sounds like?’ question, The Trudy sound like The Trudy and that's a fine distillation of pop styles, tricks, flashes, affectations and inspirations.
If you like pop, you will love this album and if you like rock, you will go ga ga for it and pretty quickly.
IS IT ANY GOOD? Yes, "Always Never Beautiful Forever" is a top pop album and it is an album, not a collection of singles, but there are no duffers and no fillers. Now, spin this shit. (Unpeeled)

Rocket Heart, the new single from The Trudy, is taken from their forthcoming album Always Never Beautiful Forever which is due for a release next month. The band have been going since the early 1980’s and there are hooks and influences from each decade of their existence here resulting in a pretty damn near perfect pop song. (Records I Like – review for Rocket Heart single)

‘Bucolics Anonymous’ is the second single to be taken from the band’s forthcoming new album and embodies the happy-go-lucky and feel good charms of pop that this band do so well. (Is This Music? – review for Bucolics Anonymous single)

A lovely exercise in indie guitar rock, with some classic vocals courtesy of Melissa Jo Heathcote, and a nice line in clever witty lyrics (Whisperin’ and Hollerin’ – review for Dirt Cheap Melody single)

“Dirt Cheap Melody” is bold and bright and breezy pop music with the lid blown off and a fat rainbow bursting out. If it doesn’t stick in your head, you’ll need to get yourself to a hospital and ask them to check your skull for holes. You’ve probably got a leak somewhere. (Pushblog – review for Dirt Cheap Melody single)